Jesús Bernardo Gamarra Farfán was born in 1945 as Alfredo Gamarra's son. From his childhood on, he was involved with arts like drawing, painting and music. He produced films, has been disckjockey, photographer and  rocksinger. He studied Justice, but changed his mind when he started to get involved with the investigations of his father. He than studied Cinematography. An important production for Peruvian television was Kerara Marka, which he co-produced with Panamericana Televisión in 1987. It was based on the novel of 1974 called 'Los trabajos de Alfredo' (The works of Alfredo).

The first time I met Jesús, he was the leader of the band Arac Ancestral, the band that performed during the opening of my pub in Cusco. He wrote more than 250 songs, all to be played with ancestral instruments from the Andes. He posesses a big collection of this kind of instruments.

He is also the president of the 'Asociación Cultural Alfredo Gamarra', which is dedicated to proof the scientific veracity of the sacred scripts, and the important role of Peru and the Cusco region, as the cradle of Humanity.

As a son of Alfredo, Jesús is fully dedicated to publish on film, and in written and spoken form, all the work of Alfredo. But his dedication is basically because of the value that his father's investigations have. Jesús had to discover this personally, and this is now something of which he is totally convinced. He continues to find more evidences and also continues studying on the subject.


In 2005 we produced together the DVD 'The Cosmogony of the 3 Worlds'. Jesús latest work is a book called Parawayso; demostración y evidencia para ubicar: el Paraiso terrenal, la Torre de Babel y la capital de la Atlantida en Sud America- Perú- Cusco (Parawayso; demonstration and evidence to locate: paradise on earth, the Tower of Babel, and the capital of Atlantis in South America- Peru- Cusco). Parawayso is a Quechua word for Paradise. The book, for the time being, is only available in Spanish.
Jesús can be considered as the best possible guide to see the vestiges of Cusco, and surroundings, he has several tours available to Machu Picchu, the Sacred Valley, Sacsayhuaman and a special city tour in Cusco. He was featured several times on peruvian television and recently on the History Channel on an Ancient Alien episode. A pity they only showed a few seconds of the interview (his participation starts at 3 min 7 seconds), that lasted for hours when recording. The information they got from him was used to only argue in favour of the alien explanation, despite of him having much better explanations, to my opinion, but that have not been broadcasted.
See here:


Many of the features mentioned in this and other ancient alien episodes, are explained in The Cosmogony of the 3 worlds, without the necessity to look for extraterrestials, although the explanations of Alfredo and Jesus Gamarra certainly are not less spectacular, they have much more logic behind them!

Very important to mention is that, apart from being Alfredo's son and being in charge of Alfredo's 'inheritance', his approach to life is from a metaphysical point of view. He definetely tries to do good in this world and does metaphysical sessions for people in need.

Here a picture of Alfredo and Jesús in Sacsayhuaman: 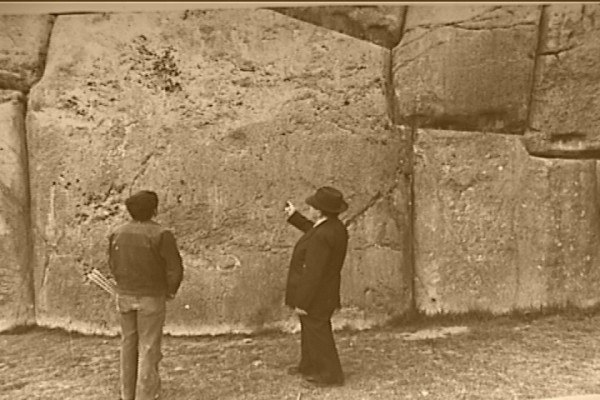 Do you have questions or comments? Would you like to have a tour with Jesus or buy his book (only in Spanish for now). Than please fill out this form, and we will answer you as soon as possible. Your e-mail address is totally secure, see our Privacy Policy .


Didn't you find what you looked for on this page?