The archaeological proofs on a DVD, explaining the ancient mysteries of the Inca vestiges

Together with Jesús Gamarra we produced a video on which we present the archaeological proofs. The video, called 'the Cosmogony of the Three Worlds', shows clearly the presence in the vestiges in and near Cusco of:

These points are the visual evidences of Alfredo Gamarra's work, all based on archaeology. The documentary is available for delivery to your homeaddress on a DVD. It presents the clear and hard to deny archaeological proofs.

The DVD sets the framework on which Alfredo Gamarra's investigations and theory are based. He came to the conclusion that the 3 different styles we recognize in all the vestiges, correspond to three different periods of human history. The first style is holy for the two later styles. The vestiges of the first and second period show phenomena that till now where not explained in an acceptable way. Alfredo Gamarra said that, because of less gravity in the past, it was possible to handle huge blocks of stone, treat stone with moulds, and give them a vitrified finish. Those stones must have been soft once.

The relatively big presence of the first style in Cusco and surroundings, leads to the conclusion that this part of the world was important during the first period, and could be considered as the craddle of Humanity.

1. Introduction: about the different calendars of the past, and how the Cosmogony of the 3 worlds is reflected in symbols all over the world.
2. Hanan Pacha, or first world. An inventory of this first construction style, a style that was considered sacred by the following two styles.
3. Uran Pacha, or second style. Examples of this second construction style: the walls with the perfect fitting stones.
4. Ukun Pacha. Our present period. In the vestiges of Cusco and surroundings it were the Incas who constructed over or around the other two earlier styles. It was all during our present period of time and orbit of 365 days, so very recent. It means that only this part, the walls with smaller and not perfect fitting stones, were made by the Incas, and that the 2 earlier styles are much older.  Examples of these constructions.
5. 'Over' Construction, many examples of the 3 different styles above each other in always the same order.
6. Surrounded Rocks. Many examples where the first style is surrounded with the walls of the second or third style, as a type of protection or respect. These rocks were definitely sacred!
7. Moldable Stones. Examples were the moulded aspect of the rock is obvious. These can be found in both first and second style. A simulation with clay and a comparison with modern package material.
8. Vitrified Stone. Examples of the systematic vitrification that was applied with the first and with the second style. See this chapter for free here on this website:
Vitrified Rocks.
9. Other Places in the World with the same characteristics. The styles and phenomena mentioned above also exist in other places as are for example Egypt, Malta, Turkey, Felsberg (Germany), Yonaguni, Stonehenge, Jerusalem.

The DVD is available in English, Spanish and Dutch. The price is $20,-, shipping is free all over the world!

NOW WITH FREE FILE TO DOWNLOAD FOR VIEWING ON YOUR IPAD TABLET COMPUTER OR CELLPHONE! 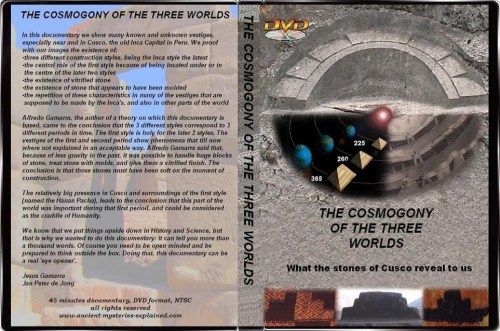 New! Now available also a download for viewing on PC, Apple, Ipod and Ipad for only $7,99. Please pay by paypal, and you will be sent a download link. Please take notice that this can take till 1 day before you get it in your emailaddress.


Do you have questions or comments? Than please fill out this form, and we will answer you as soon as possible. Your e-mail address is totally secure, see our Privacy Policy